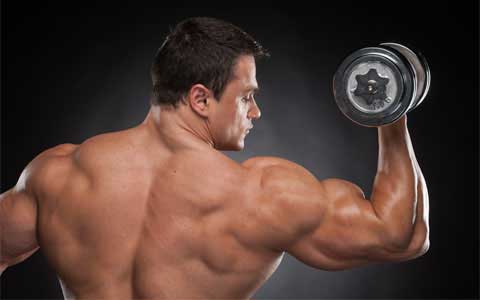 The BMI of this bodybuilder may classify him wrongly as obese. © BlueSkyImages - Fotolia.com

Calculate your BMI plus your SBMI

Read why you should know both of them

Fat or non-fat, that is the question

The question put more precisely: Is a high body mass index caused by high body fat, by a high fat-free mass, or both? The BMI is only likely to be negative for health in the first case.

"Fat-free mass" is a simple term for very complex structures of the human body. Only three aspects will be discussed here. The first one challenges the concept of BMI as a health indicator while the second one lends it some support. The third one tells us why physical activity is so important for maintaining a healthy weight.

Fat-free mass accounts for 60 – 85% of the body mass in most people, depending on their sex, age and fitness.

The amount of fat-free mass is higher in young people and in males.

Apart from the very obese, a person's fat-free mass is substantially higher than the body fat mass. It is the "healthy" part of body mass, and this healthy part contributes most to the body mass index. The 'health bias' of the body mass is the main drawback of the BMI.

Nevertheless, an important fact supports the use of the body mass index: If weight is gained it is more likely to be due to a gain in fat than a gain in fat-free mass.

Fat-free mass is made up of muscles, tendons, bones, ligaments, connective tissue, blood, nerves, inner organs, and the like. All these structures are shaped according to their functions which stay more or less the same during life. Therefore, it is unlikely that their mass will change very much. However, bodybuilding is the exception that proves the rule.

Body fat, in contrast, is a form of enery storage. In abundance the reserves will wax and in the case of energy shortage they will wane.

Hence, a high body mass index is most likely to be caused by high body fat. This is the reason why the BMI is still used as a health indicator.

Why physical activity is so important

Roughly speaking, fat-free mass is an energy consumer and fat mass is a store for energy that has not been consumed. The higher the non-fat amount of the body mass, the greater the amount of energy consumed and the lesser the energy left to build up fat deposits.

Muscles play the most important role, because they consume a large share of the total energy; it is up to every person to influence this energy consumption by doing sport and other kinds of physical activity.

Muscles grow, the more physical activity we do. More muscles consume more energy, even during rest. Therefore, less energy is put into fat, thus making it much easier to maintain a healthy weight.

Example of an obese older man

Energy supply and store is most important in critical life periods.

Example of an obese older man